“Planet Earth has been reduced to garbage-strewn radioactive desert inhabited by humans devoid of all hope for the future,” 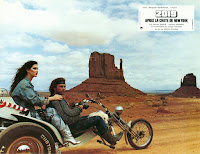 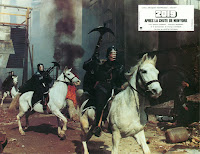 New York City was a frequent location for Italian exploitation films and why not?  Seeing as how most of the Italian exploitation films of the 70's and 80's were specifically designed to pass for an American product (with the actors and directors often credited under Americanised pseudonyms), it would only make sense to use America’s best-known city.  Interestingly enough, these films rarely portrayed New York as being a very pleasant place.  There was always either a mob war or a zombie invasion or police corruption or a madman with a knife to deal with, basically presenting New York as representing every negative thing that has ever been thought about Americans.

After the international success of the first two 'Mad Max' films and John Carpenter’s 'Escape from New York', there was a handful of Italian films that were meant to portray what life would be like in New York after a nuclear apocalypse.  (In most cases, life would not be pleasant.)  Of the films that made up this odd, yet undeniably energetic genre, 1983’s 2019: After The Fall of New York is one of the best.

Generally speaking, every post-apocalyptic film opens with the task of explaining what went wrong or who went to war with who.  In this case, the war was started 19 years earlier by the European-Asian Alliance or Euracs.  After reducing America to atomic rubble, the Euracs set up their headquarters in New York.  When 2019: After the Fall of New York opens, the few radiation-scarred survivors have been reduced to living in the sewers and eating rats.  The Eurac army rides through the streets atop white horses, capturing survivors and subjecting them to terrible medical experiments.  Consider this: 2019: After The Fall of New York was an Italian-made film about evil Europeans (including, presumably, soldiers recruited from Italy) invading America.  If you ever had any doubt about how determined the Italian film industry was to appeal to American audiences, 2019: After The Fall of New York should erase them.

After the bomb drops, the world is divided into two fractions; on the one side are the evil Euracs, and on the other, the Pan-American Confederacy. Despite losing the war, there is still an American government.  The President of the Confederacy (played by Edmund Purdom, who regularly showed in strange movies like this one and 'Don't Open Till Christmas' & 'Pieces' is determined to savage what he can of American society before relocating to either Alaska or the moon.  Just in case you had any doubt that this movie was made a long time ago, the supporters of the Pan-American Confederacy are called the Confederates.  And they’re the heroes of the film…

It turns out that there is only one fertile woman left on Earth.  The Confederate President is determined to take her to the moon to harvest her eggs and use IVF to restart the human race.  However, she is currently in a state of hibernation in New York (which, we are told, protects her from the radiation.  That doesn’t really sound quite right but we’ll just go with it). President Purdom wants her before the Euracs track her down!

Meanwhile, Parsifal (Michael Sopkiw, 'Massacre in Dinosaur Valley', 'Monster Shark') is in Nevada, where he makes his living by winning violent car races.  After his latest race, a weird cyborg clown thing awards him with some jar lids and a sex slave named Flower (who may or may not be a man in woman's clothing) However, because he’s a good guy, he lets the slave go free. Before leaving, Flower does tell Parsifal (in an incredibly deep voice) about the existence of cyborgs, which is information that comes in useful later on.  No sooner has Parsifal done his good dead then he’s grabbed by some Confederate soldiers and taken to see President Purdom.  Purdom doesn’t quite say, “I heard you were dead,” Ala 'Escape from New York' but he might as well. Parsifal  is sent by the President  into the wasteland that was once New York; in an effort to rescue the fertile female teaming up with a group of misfits including the one-eyed Ratchet (Roman Geer) and a bitter former academic named Bronx (Vincent Scalondro).

Parsifal and his team enter New York and battle mutants, rats, treacherous bounty hunters, vigilantes and junkyard punks that infest the barren and brutal landscape, while staying one step ahead of the lethal Euracs and their  commander (Serge Feuillard). No one said that  extracting the key to mankind’s survival would be easy.

That’s right, George Eastman is in this movie. If you know the least bit about Italian exploitation cinema, you will not be surprised when George Eastman shows up.  You also won’t be disappointed.  Eastman (whose real name is Luigi Montefiori) was a regular presence in everything from Spaghetti Westerns to grisly thrillers like 'Antropophagus' to flamboyant gialli like 'Delirium' to post-apocalyptic thrillers like 'Endgame - Bronx lotta finale' '1990: The Bronx Warriors','Warriors of the Wasteland'  and this one.  As always, Eastman is a lot of fun to watch in the role of Big Ape.  Nobody played hulking menace with quite the flair of George Eastman at his best.

Along with Eastman, 2019: After the Fall of New York also some cult appeal because it starred Michael Sopkiw.  The handsome Sopkiw had a short film career, starring in four Italian films and working with directors like Lamberto Bava and Sergio Martino, before retiring from acting.  The briefness of his career and his backstory as a former sailor-turned-marijuana smuggler-turned-model- turned actor - turned Californian plant atrium entrepreneur has given Sopkiw a certain enigmatic mystique among fans of Italian exploitation.  2019: After the Fall of New York was Sopkiw’s first role and he brings a lot of enthusiasm to the role.

2019: After The Fall of New York is full of interesting oddities that set it apart from your typical Italian post-apocalyptic thriller.  For instance, a radiation-scarred man is occasionally seen wandering through the rubble, playing a trumpet and, at one point, serving as a chorus to the action.  Another character, in a scene reminiscent of a Fulci film, has his eyes graphically ripped from their sockets and spends the rest of the film preparing for an eye transplant. the guns used by the confederate soldiers are remarkably similar (if not the exact) to the ones used in 'Barbarella' Two of Big Ape’s followers are dressed up in 'Planet of the Apes' costumes  big Ape even gets a chance to show off his skills with a scimitar.  Perhaps my favourite random detail is that the Euracs do their evil plotting in front of a reproduction of Picasso’s Guernica. 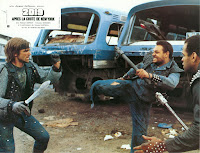 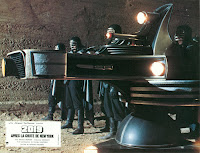 The Bottom Line:
By no stretch of the imagination would you say that 2019: After the Fall of New York is a great film... but it is an entertaining one. A modest budget but seriously produced effort imitating some similar future-esque apocalypse genre Hollywood flicks. Director Sergio Martino (All the Colours of the Dark) delivers one of Italian exploitation cinema’s finest post-apocalyptic entries with 2019: After the Fall of New York. A gung-ho, blood-splattered tale of one man’s quest for humanity’s Holy Grail.   It’s just so wonderfully weird. In fact, the whole movie is wonderfully weird.  2019: After The Fall of New York is Italian exploitation at its best!

“Where this woman is can make babies!?” — Big Ape (George Eastman), asking the question that everyone’s wondering in 2019: After The Fall Of New York (1983)

2019 Critical Reception:
I’ve seen the future,  all of mankind has been reduced to horrible wardrobe and lousy special effects make-up. At least that’s the future in the 1983 Italian film by director Sergio Martino 2019: After the Fall of New York, which by no coincidence appears to be a knock off of John Carpenter’s 1981 Escape From New York.

The opening shot of 2019 is actually photographed quite nicely. A sequence of long shots manages to capture a believable post-apocalyptic environment in ruin. It’s dark, dreary and morbid, until you begin to notice the obvious miniature models of buildings that make up the city. This is your first reminder that you are watching a low budget sci-fi action film. A mixture of genres difficult to pull off and this film fails in doing so.
Excerpt from FilmMonthly located HERE

One of many thousands of Italian Road Warrior/Escape From New York rip-offs, After the Fall stands out by being not only hellishly entertaining, but for featuring a character named "Big Ape." It's 20 years after the nuclear holocaust, and the "Pan American Confederacy" is hot to breed up a new batch of citizens. Black-clad "Eurac" soldiers on horseback battle survivors in an attempt to round up subjects for experimentation, while "handsome, virile actor" (so sez the box) Michael Sopkiw (as Parsifal) takes part in some kind of hot rod demolition derby. Punk rock chicks shriek from the hilltops as Parsifal rains destruction on his foes, culminating in a bare-knuckle brawl and the approval of a weird clown robot. Parsifal rides off with his hot Italian girlfriend (who says "You're too much, Master--and you're going to make great love"), but is waylaid by members of the Pan Am Confederacy.
Excerpt from Filmvault located HERE 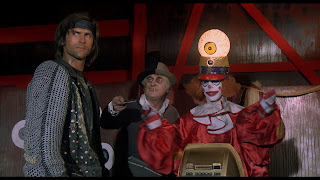 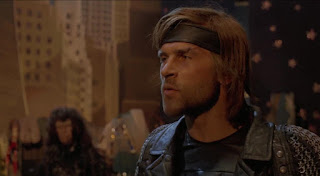 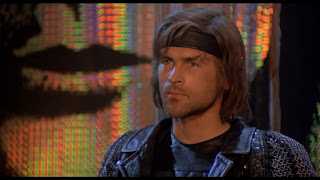 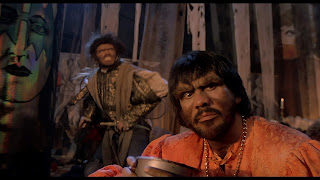 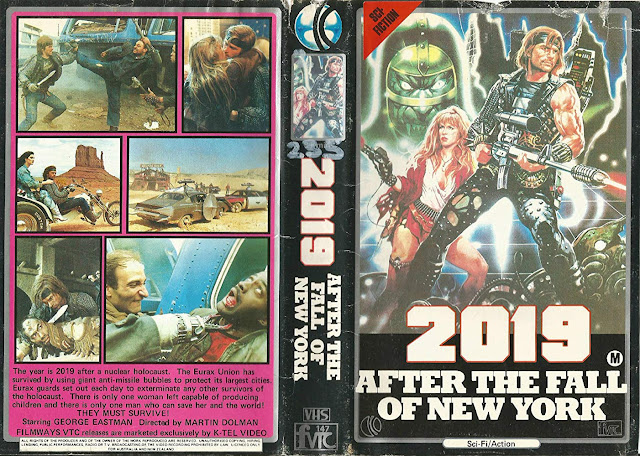 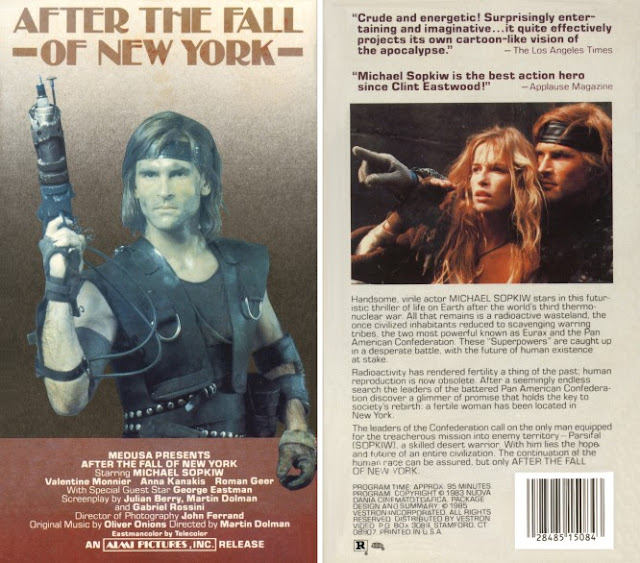