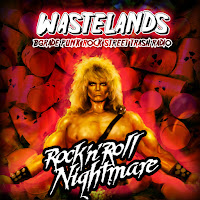 In this episode Adam and Mark kick of their three part discussion on the topic of 80s metal/ rock horror movies, or Metalploitation. First Cab of the rank is the 80’s Canadian god of hair metal and champion body builder Jon Mikl Thor and his Self-produced disaster-piece Rock’ N Roll Nightmare from 1987.
Back in the 70’s JMT was a very successful athlete, as a bodybuilder, he was the first Canadian to win both the Mr. Canada and Mr. USA titles. During his bodybuilding career, he has achieved over 40 titles around the world.
If this wasn’t weird enough as a musician, he fronted the heavy metal band Thor, billing himself as "The Legendary Rock Warrior". JMT started touring in 1973. The band was first known as "Mikl Body Rock" and "Thor and the Imps" before deciding on the name THOR.
He combined strength feats, props, costumes and showmanship with music such as bending solid steel bars in his teeth and having solid concrete blocks smashed off his chest with a sledgehammer. THOR toured Canada and the USA throughout the 1970s and 1980s. If the idea of a bodybuilding metal lord still isn’t enough for you, In 1986 JMT retired from live performances and started to write and produce films.
In the 80’s metal and horror went together like acid washed jeans and feathered hair. The trouble was, even though many horror movies had awesome rock soundtracks, the movies that specifically featured rock musician characters as heroes or villains varied wildly in quality and generally resulted in outcomes that were so bad they were good and often unintentionally funny. This is definitely the case with Rock n Roll Nightmare. In Rock n Roll Nightmare an 80's metal band go to an old house to record an album. It's possessed, and demons that strangely enough resemble drug addicted gutter muppets start killing people. In between death scenes the band rocks out and washes a lot of dishes. Thor himself wrote and produced the film and soundtrack. That's really all you need to know, because nothing else in the movie makes a lick of sense. The direction, acting, special effects, and script are absolute hilarious pieces of trash.
That's what allows Thor's stage presence to really shine. It's really just a long music-video that has a horror story thrown in. The music is classic, if you like that style, and if you don't you shouldn't be watching it in the first place.. If you love comic books, glam metal, and mythology and your movies with more cheese than a triple cheese hamburger pizza this is the crown-jewel of entertainment. An absurd good time!!