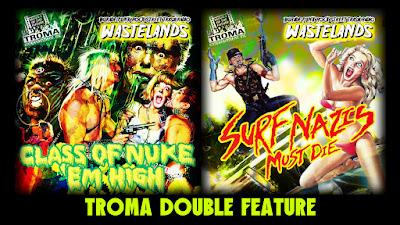 In this episode Adam and Mark take on two Troma classics where the schools teach readin’, writin' and radiation! and the beaches have become battlefields... the waves are a war zone! Listeners and losteners brace yourselves for Class of Nuke 'Em High (1986) and Surf Nazis Must Die (1987).

Class of Nuke 'Em High (1986) - When Warren and Chrissy notice some strange things happening around their high school, when the pupils start acting and looking strange after buying contaminated drugs from a nuclear plant worker. They begin to suspect that something is going on at the nuclear plant next door. Though the plant officials deny that there are any problems, Crissy gives birth to a bloodthirsty mutant who immediately begins eating everyone in the school. Will Warren and Chrissy be able to stop their killer kid?
Factoids

Surf Nazis Must Die (1987) - When the son of a gun-wielding woman is murdered by neo-Nazi surf punks in the post-apocalyptic future, his Mama hunts them down for some bloodthirsty revenge. Possibly the best title ever... An earthquake leaves the California coastline in ruins and reduces the beaches to a state of chaos.

A group of neo-Nazis led by Adolf (Brenner), the self-proclaimed "Führer of the new beach", takes advantage of the resulting chaos by fighting off several rival surfer gangs to seize control of the beaches. Meanwhile, an oil well worker named Leroy (Harden) is killed by the surf Nazis while jogging on the beach. Leroy's mother, "Mama" Washington (Neely), devastated by the loss of her son, vows revenge.  After arming herself with a handgun and grenades, she breaks out of her retirement home and exacts vengeance on the Surf Nazis. For, amongst other things, the excellent synth soundtrack by Jon McCallum, for having a character called "smeg",for the hilariously obvious shock shots of the sky, surf and the bunker area, and for the immortal line "taste some of mommas home cooking Adolf", this films deserves 10 out of 10.

Factoids
Surf Nazis Must Die was criticised by reviewers as boring and hard to follow, and its acting, dialogue, and camerawork were widely panned. Janet Maslin wrote "Not even the actors' relatives will find this interesting." Roger Ebert stated that he walked out of the film after 30 minutes. 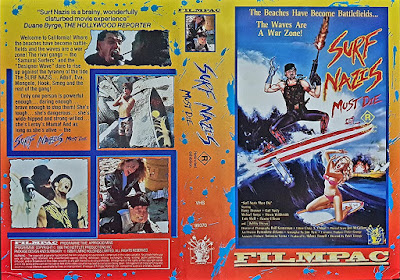