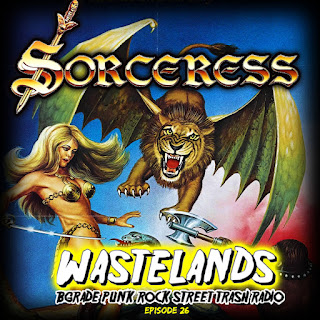 In this episode Adam and Mark dive into the b-grade world of Conan the barbarian inspired sword and sorcery flicks. To kick off this week hey discuss the Roger Corman produced disasterpiece from 1982 Sorceress. featuring more dungeons, swords, sorcery, witches, danger, wizards, danger, desire, evil magic, martial arts, fighting, the skills of the masters, a battle to control the entire known world, weird goat and monkey men and magical woman warriors than you can point a battle axe at.

A powerful conjurer of the Black Arts, Traigon, makes an unholy pact with the evil deity, to sacrifice his first born to become the master of the universe. However, fate has other plans, and as the magician's wife gives her last breath to protect her newborn twin daughters, Traigon cant tell which of his daughter was born first, hi wife dies, Traigon dies and the twins are taken away by the good wizard Krona who gives them the unlimited power of the blue force. Nearly two long decades later Traigon is resurrected and the dauntless warrior-sisters, Mira and Mara, embark on a dangerous mission to avenge their slaughtered mum with a Viking, a creepy half man half goat and a oily permed barbarian. 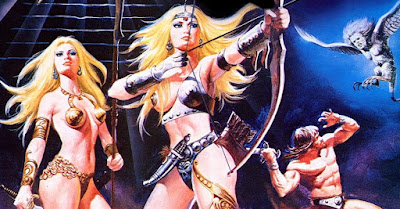