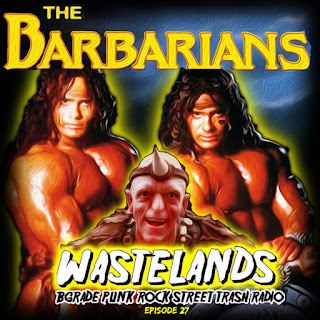 In this episode Adam and Mark dive back into the b-grade world of Conan the barbarian inspired sword and sorcery flicks. This week adventure is the 1987 Cannon action comedy - The Barbarians. Directed by the infamous Robert Deodato who was responsible for Cannibal Holocaust in 1980.  Featuring David and Peter Paul as Twin barbarians. It's just like Conan but with two Conan's and everybody's favourite Hills have Eyes creep and wastelands favourite Michael Berryman as the appropriately named Dirtmaster and George Eastman.

Twin barbarians seek revenge from the warlord who massacred their tribe and captured them when they were small children. It's completely campy and it doesn't take itself seriously for a moment. Starring former professional wrestling duo the Barbarian Brothers, these actors -- which is a loose description of what they are doing on screen -- look like they are having a ball filming, and it's hard not to share in the fun. It really is a must-see Italian exploitation flick.
Highlights no explanations given – you’ll just have to watch it – Bear creature, man cry, erection dragon and oily walnuts!
Trailer - https://www.youtube.com/watch?v=7mXWAFI3PXs 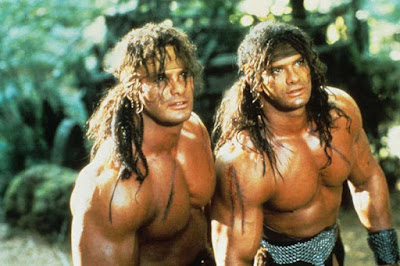