In this episode Adam and Mark decide to ponder upon some of their favourite punk bands. First cab off the ranks is legendary Mohawk punkers, The Exploited. Listen as they go all fanboy and discuss most things fact and fiction as well as their favourite Exploited Albums, Songs and moments. 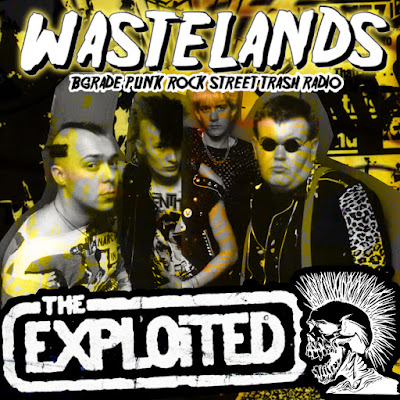 The Exploited is a Scottish hard-core punk band from Edinburgh, Scotland, formed in 1979 by Stevie Ross and Terry Buchan and later joined by his brother Wattie Buchan. They signed to Secret Records in March 1981, and their debut EP Army Life and debut album Punks Not Dead were both released that year. The band maintained a large cult following in the 1980s among a hard-core working class punk and skinhead audience. Although The Exploited continues to perform live, they have not released any studio material since their last album Fuck the System in 2002.

Their songs have been covered by Slayer and Ice-T, and despite many line-up changes, Wattie has remained as the Exploited’s singer and leader. The Exploited are one of the iconic bands of the UK 82 punk movement along with, GBH and Discharge. The term "UK 82" came from The Exploited's song "UK82". UK 82 (also known as UK hardcore, second wave punk or No Future punk) took the existing punk sound and added the incessant, heavy drumbeats and distorted guitar sound of Motörhead. The term UK 82 is taken from the title of a song by The Exploited. Cross-pollination existed between this era of British street punk and American hardcore punk. The lyrics of UK 82 bands tended to be much darker and more violent than the lyrics of earlier punk bands. They tended to focus on the possibilities of a nuclear holocaust, and other apocalyptic themes, partially due to the military tension of the Cold War atmosphere. The other mainstay of the lyrics of the era was unemployment, and the policies of the Conservative Party government. Lyrics frequently denounced the Conservative leader Margaret Thatcher in the same way that American hardcore punk bands addressed the Ronald Reagan administration. AllMusic described The Exploited as "one of most riveting British punk rock units of the early 1980..

In the 2007 documentary Punk's Not Dead, both Wattie and Wullie Buchan are interviewed. They are the only two native speakers in the documentary to be given subtitles, as many North Americans struggle to understand the Scots language used.- https://www.youtube.com/watch?v=S9b_M-i7HF0

The Exploited ON TOUR - Thursday Dec10 2015
Venue - The Zoo, Brisbane, Australia
Supporting Artist - The Scam / Plan of Attack / The F1-Elevens

As the clock hit 10.30pm, the Scottish madmen commenced the evening’s craziness with Let’s Start a War, followed by Fightback, and Dogs of War.  Having suffered a heart attack onstage in Portugal at the beginning of 2014 showed no signs of slowing down. In fact, the renowned anarchist couldn’t even hide a few cheeky grins throughout the set to show he was having a good time during their first stop of the Aussie tour. This current member line-up of The Exploited is by far the sturdiest and tightest over the bands entire career. Matt McGuire’s axe work adds a more metal edge to the songs, while Irish Rob directed all of his energy into punishing the bass and swinging around his massive mop of dreads. The twenty plus song set list weighed heavily on the Fuck the System, Punk’s Not Dead, and Troops of Tomorrow albums, but not forgetting to throw in some other belters such as Beat the Bastards, and Porno Slut. Sex and Violence gave the opportunity for one lucky punter to test out his pipes while Wattie took a short break before returning for Maggie and the punk classic Punk’s Not Dead. As this hot and muggy night drew to a close, Was It Me wrapped up an absolutely superb Thursday evening out on the town. These punks might be older, but they are far from dead. Great stuff!